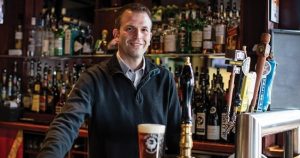 The Grand Banker & Brigantine Inn opened its doors in 1996, and was founded by Alan Creaser, when he determined it was time to move back home to Lunenburg, after being a part of creating and operating the Halifax landmark, and still successful “Your Father’s Moustache” restaurant.  In 2014, Alan decided to dial back and sell the business, to a fellow Lunenburger and former employee of his who he had stayed in touch with throughout his career, Adam Bower.

Adam Bower’s career in the food and beverage industry has come full circle and he couldn’t be happier. The new owner of The Grand Banker Bar and Grill and Brigantine Inn in Lunenburg worked there from 1998 to 2002 as busboy, server and eventually assistant manager, while attending Mount Saint Vincent University. That early foray in the restaurant business convinced Bower that food service was the industry for him.

“When Alan (Creaser) gave me my first job at “the Banker” I realized that I wanted to own a restaurant in Lunenburg someday. But you just don’t know if an opportunity likes this will ever present itself.”

After graduating from Mount Saint Vincent with a Bachelor of Tourism & Hospitality Management degree, Bower headed west to be a manager at the prestigious Fairmount Jasper Park Lodge Luxury Resort in Alberta. After four years out west, the call of the Atlantic brought him back to Nova Scotia, as Food & Beverage Manager at the Delta Hotels in downtown Halifax. After almost ten years working in the demanding but rewarding environment of a large hotel, and a shorter stint in a managerial role at The Halifax Club, an opportunity to purchase the landmark Lunenburg restaurant presented itself. Adam credits The Grand Banker’s owner and his former employer, Alan Creaser, for the mentorship he provided through the entire process of becoming a business owner.

When asked if he had some trepidation about the move from manager to owner, Bower said: “Because I already had a great understanding of the business, having worked there for years, I wasn’t nervous at all. I was just happy to be coming back to the community I grew up in and excited to bring my experiences to my home town.”

While many of The Banker’s most popular menu items remained the same, Bower has successfully enhanced the menu offering which has continued to be well received and created a buzz with it’s patrons. “From my previous time working at the Grand Banker and growing up in the town, I was fortunate to know the signature dishes that the place is known for to keep, but saw the opportunities of new creative dishes to enhance our offering for our patrons!”

The CAPS (Canadian Association of Professional Sommeliers) trained sommelier introduced new wines from classic wine regions from around the world, and extended the selection of local wines as well. The beer also got an overhaul and become much more local in nature. The Grand Banker has always served Propeller and Garrison, but Bower made room for a line each for the South Shore’s own Boxing Rock and Hell Bay breweries. He also made room for a beer from Cape Breton’s Big Spruce and serves a Smoked Porter from Uncle Leo’s Brewery, which is located near Pictou. There is also random taps and a cask line with a rotating selection, showcasing the ever-growing craft breweries from around the province.

The biggest buzz in town with regards to The Grand Banker may in fact be Bower’s decision to open the property year-round. “There are not many options in Lunenburg during the winter. There’s definitely a demand in town for another dining option during the off months” says Bower.

Everything seems to have fallen into place for Bower. To top it off, he and his wife Christina had their first child, a baby girl, Anna, just two weeks after opening the restaurant, and Bower couldn’t be prouder than the prospect of running a successful business and raising a family in his hometown.